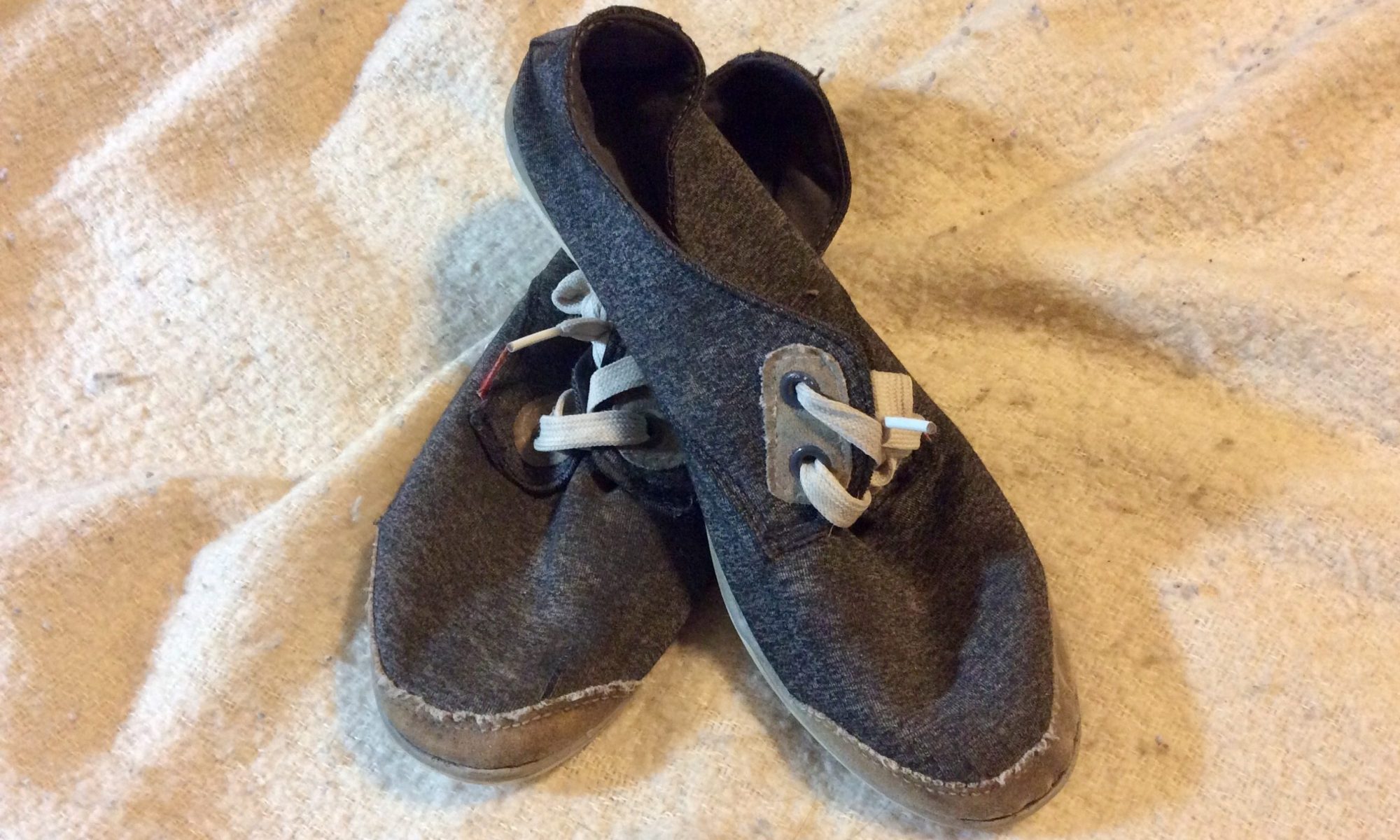 “I can’t find any shoes!” I was nearly in tears and panicking. My only shoes were gone and that meant no school, which meant no meals either.

“What?” Anne was home and awake that morning as we tried to rush out the door in time to eat breakfast at school. “You’re gonna miss breakfast if you don’t leave really soon.”

“I know!” I sobbed, “but I’ve looked everywhere and I can’t find any shoes.” It might seem strange that my shoes could vanish, but with the number of people in and out of our house daily, things went missing all the time and we took it in stride. Granted, it had never been my only pair of shoes that disappeared before.

“Boys, go ahead and go. No point in your missing food.” Anne pushed the boys toward the door. Brandon nearly burst into tears. She stood between me and the boys, who were heading out the door. She turned back to me. “Where did you put them?” she asked, as she picked up her fanny pack and cigarettes, signaling that she was getting ready to leave, too.

“I won’t go to eat if she doesn’t!” Brandon called resolutely from the doorway. I knew he was hungry. We hadn’t eaten since school lunch the day before. We all looked forward to breakfast at school.

“She won’t be going to school at all if we can’t find any shoes. You can’t miss any more school, they already called about it, now go!” She pointed out the door and he started walking, still looking back at me with tears in his eyes as he followed Tony up the stairs to the road.

Anne set her stuff down and looked for the shoes with me for a minute or two. It was not a large space. There were two small bedrooms on a short hallway, a bathroom, and the living/dining/kitchenette we stood in. She stood up from looking under our worn couch with a sympathetic frown on her face.

“Well, if you can’t find them you’ll have to stay home.” She picked her things up again.

“I’ll send you with a note tomorrow, keep looking until you find them,” she said. She pulled on her fanny pack and headed toward the door. I stood in my stocking feet watching her back disappear down the sidewalk. My stomach growled.

I wonder if not having shoes is an excused absence.

I wasn’t able to go to school that day because I had no shoes. I looked everywhere in our tiny apartment several times. I kept thinking that being late would be better than missing the whole day. I found nothing that would work. In the back of a closet, I found an old pair of Anne’s sandals. She’d barely worn them because they gave her blisters. When I tried to wear them, my feet slipped around and they slipped off unless I walked very carefully. They were way too big. They would never do for a school day.

I sat on the couch. I felt numb and resigned to my lot. I turned through the TV channels trying to find something educational to watch.

This day at home would mean not eating until tomorrow. I searched through the cabinets looking for anything that might have been forgotten but found nothing. Even the leftover cans that were often hidden in the back of the top cabinets had been found and eaten. Nothing was in the fridge except a partial tub of margarine. I debated eating a spoonful, just to eat something, but the thought gagged me, so I shut the door.

It was weeks after we had been to the Bishop’s Warehouse. We stretched the food we’d given as far as it would go, but eventually exhausted our supplies. We still had laundry soap and dish soap, but everything edible was gone.

I watched the morning pre-school shows and drank as much water as I could stomach. The afternoon shows began to run and I grew bored and restless. I shut it off. I could hear my stomach turn, right as the bell for lunch went off at the nearby school. I found my backpack and worked on the next assignments in the books I had brought home. That barely took half an hour, then I was bored again.

I cleaned as much as I could, quietly. I did not want the neighbors to be suspicious so I didn’t vacuum. The last thing I wanted was to explain to anybody that I had to stay home from school because I didn’t have shoes; that would be embarrassing. It might also invite attention from social workers which was an egregious sin in our home. We all toed the line of appearing ‘normal,’ no matter the personal cost.

I didn’t have anything to read except scriptures at home and I was not in the mood for that type of reading. It was a long, boring day. I knew going outside was a bad idea, at least until school let out, so I shut myself in the house and waited for the day to pass.

I sat back on the couch, staring at the grey screen. I started to plot. I did not want to spend another day at home because of missing shoes. I searched the house again, and then made a plan.

After I heard the dismissal bell ring at the school a block away, I headed outside.

I carried the old pair of Anne’s sandals and headed to the thrift store called the D.I. I stopped before going in and put them on my feet. I made sure I was hidden from the view of the door.

Once inside, I carefully walked through the store. Carefully because I was working to keep the sandals on and because I was hoping to avoid being noticed. I made sure that none of the staff was watching me as I made a circuitous path toward the shoes. Once hidden among the aisles of shoes, I pulled off Anne’s sandals and placed them on the adult rack. I knew she would not miss them, and they seemed to me as an offering to the store.

I made my way to the kid’s shoes and looked for a pair I thought would fit me. I pulled a pair of socks from my pocket and slipped them on. I kept an eye and ear out for anyone walking near, but no one was around at all. I tried on a few different pairs of worn sneakers until I found one that was a little bigger than my foot. I figured it would be best if I didn’t grow out of them right away. The prices on the shoes were written in chalk on the sole of one of the shoes. I rubbed the sole of the shoe on the carpet until I was confident that the $2.00 price was no longer visible. With shoes on my feet and a promise of being able to go to school tomorrow, I walked around the store.

Getting the shoes was only the first part of the plan. I had 50 cents in my pocket, stolen from Kevin’s peanut jar. I knew he might notice two coins missing, but he would probably let it slide. He would have been far more upset if I had taken any more than that. I walked through the racks of clothes and found a T-shirt that fit me. The price read $.25. Perfect! I thought I had to buy something in order to make my presence in the store seem legitimate.

The shirt was pink with a Lisa Frank picture on the front. It was the right size to actually fit me, too. I carried it to the clerk and smiled at him. “Isn’t it pretty?” I gushed. The pimply teen barely glanced at me; though my heart was beating so loud I was sure he would notice. I stood as close to the counter as possible, hoping to avoid showing him the stolen shoes on my feet.

“Sure.” I squeaked. I tried to say it casually but my nerves were singing. It’s working! I just have to keep playing it cool. I pulled both quarters from my pocket and held my hand flat so that he could see I had more than I needed. “Here you go.” I plucked the quarter with my left hand and handed it to him, slipping the other back into my pocket. I smiled again and avoided looking at my shoes while I waited for the receipt. He handed me the bag and receipt and went back to looking at something under the desk. This was long before cell phones, so I assume it was a book he was hiding.

I took a deep breath and held my eyes forward. I was terrified that a security guard would tackle me as soon as I got to the door. I stopped in front of the door, resting my palm on the cool metal bar for a moment before pushing it. I walked away. Every part of me was screaming “run!” I made myself walk. I knew that if they were watching, it would look suspicious, so I walked. I avoided looking back. I made it across the parking lot and didn’t start running until I was sure I was out of sight.

I stopped running after a few blocks when my side started aching. The plastic shopping bag in my hand hung limp around the pink shirt crumpled inside. I smiled at it and at the new sneakers. They were pretty nice. And, I’ll get to go to school tomorrow. I breathed a sigh of relief that my plan had worked. I didn’t feel bad stealing. It was just something I had to do. I needed shoes. Going to school was a lifeline. It was my only source of affection, appreciation, and accomplishment. It was also my primary source of nutrients.

I felt hungry and thirsty. I didn’t have the energy to run anymore. I was weak and tired. I had already over-exerted myself, and the adrenaline from my heist was wearing off. I thought about the quarter in my pocket and decided that I would head to the nearby grocery store to cool off and drink water. I could look for free samples and buy a 10 cent donut. There was even an Arctic Circle on the way where I could get a free ice cream cone if I stopped in and asked.

It turned out to be a great afternoon, though we never did find out what happened to my shoes.